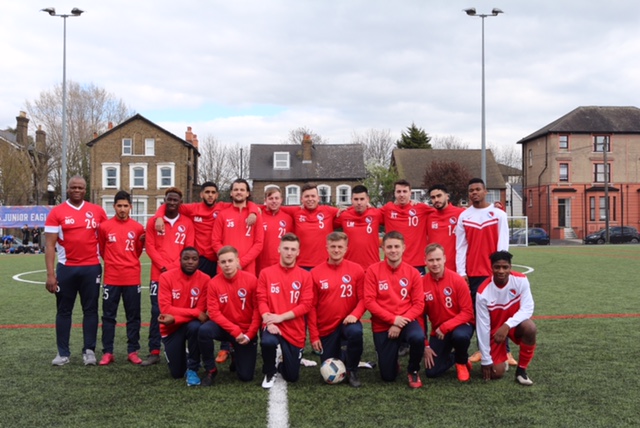 In our first game together as newly formed Selhurst SA we got off to a very strong start to the game keeping the ball comfortably round the back and dictating the early stages.
The first chance though fell to Ewell through a counter attack saw a Jake Seager slip allow their striker through in on goal which forced a smart save from stand in keeper Callum Lansley. Moments later Ewell drew first blood with Liam McEvoy gifting away possession then giving away a dangerous free kick which their big man upfront made no mistake from towering in a header into the corner. 1-0 Ewell.
After that we lost our flow for a bit and the play became scrappy until Dalton Glynn found Rob Tanner in the pocket who turned the defender beautifully and his brilliant strike forced a marvellous save from the Ewell keeper. We kept the pressure up with Ben Camara going close with a couple of chances before our pressure finally paid off when Pepito Wilenge found Ben Camara who rounded the keeper and cooly slotted home to equalise. Game on 1-1. Saif Almoussaui then went very close forcing another good save from the Ewell keeper.
The 2nd half began as a very tense affair with both sides having chances to score with Dan Sibthorpe going close for Selhurst before Callum Lansley was tested with a couple of strikes which he was equal too. We then found the breakthrough with Charlie Turner catching the defender flat footed breezing past him and then sending the keeper the wrong way to slot home to give Selhurst a 2-1 lead. Within a couple of minutes later the lead was further extended when Raoul Camara beat the left back for pace and fantastically finished across the keeper. Ewell were rocking at this point and with only some good defending stopping Dalton Glynn and Rob Tanner further extending the lead. The lead was then further extended to make it 4-1 to Selhurst when Rob Tanner smashed home from 18 yards into the bottom corner. In the dying embers of the game Ewell managed to grab a consolation goal through a tap in at the back post after a decent driven cross.

Overall a very strong start for Selhurst SA FC against a good side in AFC Ewell. Especially as it's our first game together as a side it was a very impressive performance also considering the rotation we carried out on the day.

Man Of The Match - Jay Bateman